Important changes to our services. Find out more

Library resources to help you evaluate information for your research and assignments.

What is fake news?

The online Cambridge English Dictionary describes fake news as 'false stories that appear to be news, spread on the internet or using other media, usually created to influence political views or as a joke: There is concern about the power of fake news to affect election results'.

A related term is post-truth. The Oxford English Dictionary defines post-truth as ‘relating to or denoting circumstances in which objective facts are less influential in shaping political debate or public opinion than appeals to emotion and personal belief'.

The term Fake news has also become the rhetoric for dismissing the statements or views of another outright. This has been used by public figures in recent years. This stance and use of the term fake news amounts to a refusal to engage with information that does not fit with your pre-existing beliefs and views. It is worrying that public figures use the term in this way as it does not promote a society where open debate is encouraged for a healthy and democratic society.

Although fake news is at the centre of many current debates, fake news is not a new phenomenon and it has many historic antecedents.  In his article 'The true history of fake news', the historian Robert Darnton has commented that '...the concoction of alternative facts is hardly rare and the equivalent of today's poisonous, bite size texts and tweets can be found on most periods of history, going back to the ancients'.

Fake news is related to, and can include, the following types of doubtful, unreliable and misleading sources of information.

The definitions below are taken from the OpenSources project, which details the mission and methods behind the curation of a fake news source list, archived on Wikipedia.

Clickbait: Sources that provide generally credible content but use exaggerated, misleading or questionable headlines, social media descriptions and/or images.  These sources may also use sensational language to generate interest, clickthroughs, and shares, but their content is typically verifiable.

According to a review of studies of fake news between 2003 and 2017, there are two main motivations behind fake news: financial or ideological.  Generally the 'clickbait' type sources described above, on the whole are created for financial gain as they generate advertising revenue. Other source types listed above can be seen as ideologically motivated.

Fake news can also be created for malicious reasons, by directing users to websites which subsequently infect the user's PC with malware - so beware!

Fake news: the what, why and how

The following video guides cover these four areas around the topic of fake news:

Here's our YouTube playlist of the above fake news videos .

You will need to assess the authors, the quality and the content on all information found online before you should consider using it.  It is up to you to investigate whether the information you are using is true, reliable and trustworthy or whether it is fake news masquerading as objective truth.

The International Federation of Library Associations (IFLA) produced this infographic with eight simple steps (based on FactCheck.org's 2016 article How to Spot Fake News) to determine the verifiability of a news item. 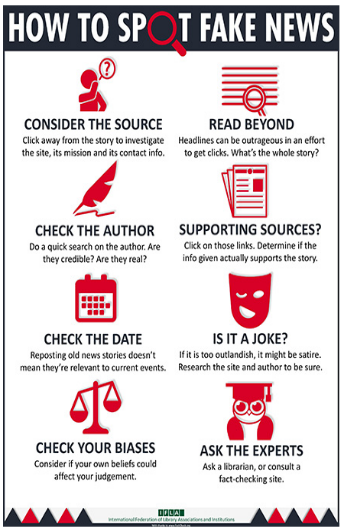 The following quick checklist should help you analyse news sources.  They have been adapted from tips by Melissa Zimdars.

Use the Library’s newspapers subscriptions to get past newspaper paywalls and to access a wide variety of current national and regional newspaper coverage.  Remember that different newspapers will have different approaches to news stories and different political agendas.